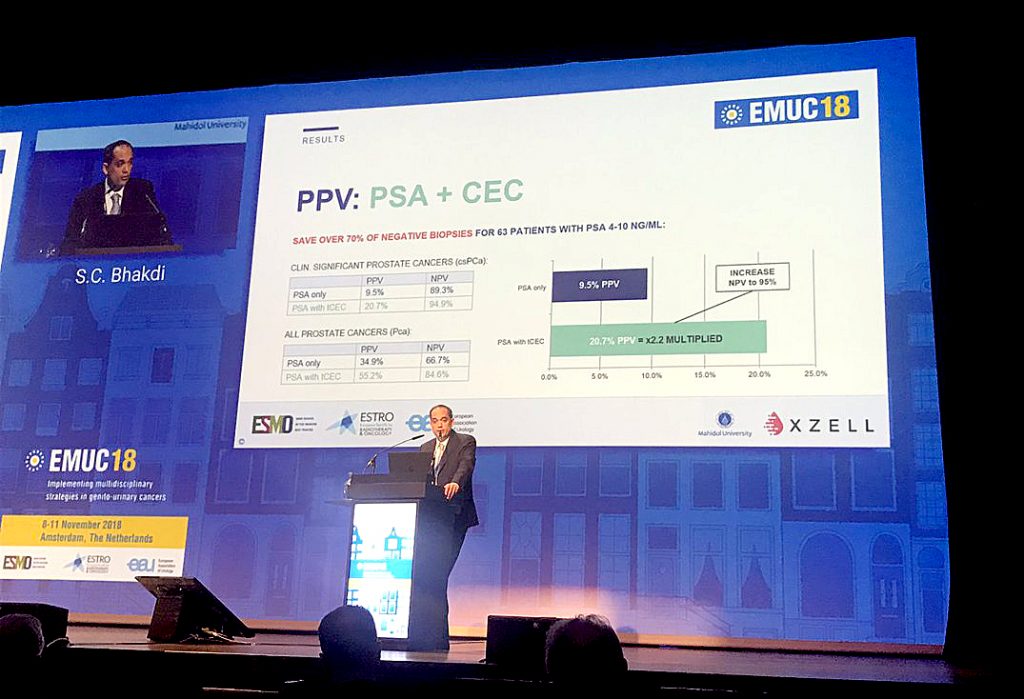 Shed from the blood vessels of earliest-stage tumours, tCEC are powerful, yet extremely hard-to-locate cancer markers that have long been branded ‘too difficult to detect’ to be considered for routine application.

In collaboration with Mahidol University in Bangkok, Dr Bhakdi and the team at X-ZELL have now found a way a way to isolate and visualize the elusive cells in a routine laboratory – in turn allowing them to develop a highly accurate blood test for early prostate cancer detection.

First revealed at the 2018 Asia-Pacific Prostate Cancer Conference (APCC) in Australia in August, the so-called ‘liquid biopsy’ has already been subject to extensive testing in Thailand, where it proved to be able to avoid seven in ten unnecessary biopsies for men with equivocal PSA readings.

In Amsterdam, Dr Bhakdi not only reconfirmed these impressive interim results, but also shed new light on tCEC’s ability to distinguish between aggressive and dormant cancers.

“As a relatively young team of researchers, we are exceptionally grateful for the opportunity to have been able to share our work with such a distinguished audience on the main stage at Europe’s most important urological cancer event,” he commented.

“It goes to show just how much of an impact tCEC could make on our collective understanding of early cancer detection – not just because they allow us to pick up the disease at a very early stage, long before any imaging technology would be able to detect it, but also because they help us distinguish between aggressive and non-aggressive disease.”

He added, “When you consider that until this time last year, tCEC have been considered undetectable in clinical routine, and now we have a fully functioning clinical assay capable of detecting them routinely at a low cost, we’ve come a long way in a very short amount of time.”

According to Dr Bhakdi, the feedback he received at EMUC18 encouraged him and his team to launch a series of new research projects in Europe and Asia to fast-track the development of additional CEC-based applications.

“Using a new platform technology developed by X-ZELL, we’ve finally cracked the code of one of the most promising cancer biomarkers in the history of cancer cell pathology. Now it’s time to explore just how powerful CEC really are for early cancer detection. Prostate cancer is just the beginning.”